Current grad student Grant Adams, along with collaborators from the National Scientific and Technical Research Council (Consejo Nacional de Investigaciones Científicas y Técnicas), released a new paper in Scientific Reports. Led by Alejandra Romero, they assessed, for the first time, the population dynamics of the southern right whales from the southwestern Atlantic Ocean at the regional level to estimate the effect of whaling and the population trend and recovery level after depletion. We reconstructed the catch history of whaling for the period 1670–1973 by an extensive review of different literature sources and developed a Bayesian state-space model to estimate the demographic parameters. The population trajectory indicated that the pre-exploitation abundance was close to 58,000 individuals (median = 58,212; 95% CI = 33,329–100,920) and the current median population abundance was estimated at 4,742 whales (95% CI = 3,853–6,013), suggesting that the SRW population remains small relative to its pre-exploitation abundance (median depletion P2021 8.7%).

After much rescheduling, the Center for the Advancement of Population Assessment & Modeling (CAPAM) Workshop on Natural Mortality was hosted in a free, fully virtual format the week of June 14, 2021. Conference co-organizers Claudio Castillo-Jordan, Maia Sosa Kapur, André Punt, and Owen Hamel (NWFSC) worked hard to create a schedule which accomodated over 300 participants from all over the world (see map).  The workshop was concurrently livestreamed to the UW SAFS YouTube page and will be available indefinitely. Keynote speakers gave provocative 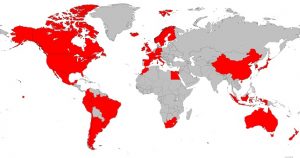 talks about the state-of-the art of estimating, developing priors for, and evaluating bias caused by natural mortality in population dynamics and assessment models. Much discussion centered around untangling the influences of life history (such as growth) and environment on temporal variation in M. Talks on the final day of the workshop highlighted how temporal variation in natural mortality brought about by climate change might complicate the accuracy of management reference points.

Please check out the CAPAM website for more background on the workshop and instructions on submitting to the special issue of Fisheries Research, which will include a Best Practices guide edited by the conference organizers.

Current grad student Grant Adams, along with collaborators from the Ohio State University, David Dippold and Stuart Ludsin, released a new paper in Fisheries Research. They explored the existence of non-additive, spatially-dependent effects of adult population size and thermal conditions on recreational harvest patterns of Lake Erie walleye. Their work identified nonlinear, additive, and generally positive effects of thermal conditions and adult population size on harvest rates. However, they found that relationships were spatially-dependent and that accounting for spatially-dependent relationships helped explain inter-annual and intra-annual variation in lake-wide harvest rates. As in marine ecosystems, their findings demonstrate the benefit of using modeling approaches that consider the spatial dependency of harvest rate on demographic and environmental factors to understanding broader harvest dynamics in large lakes.

Article can be accessed here:

All model code is available on https://github.com/rlnifong/Denitrification

Maia Sosa Kapur attended this year’s rstudio::conference in San Francisco. Her attendance was supported by a Diversity Scholarship (from rstudio). Maia completed a 2-day workshop in machine learning in the tidyverse. While machine learning (ML) has not really been incorporated into stock assessment, the method may be useful for the analysis and development of simulation studies in our field. Indeed, a recent paper in PNAS applied a robotics-based algorithm which outperformed traditional MSY-based fishery management strategies. A relevant topic discussed was model ensembling, which in fisheries modeling typically refers to the process of averaging information from different model structures.

Following her exposure to the tidyverse, Maia produced a brief guide for automating simple CPUE standardizations hosted on her personal blog here. Aside from ML applications, the tidyverse is a very versatile framework for automating transparent modeling workflows.

Maia (center) with other attendees at the rstudio::conf Diversity Scholars luncheon.

Current grad student Maia Sosa Kapur, along with Puntlab alum Jim Thorson and a host of international collaborators released a new paper presenting an extention of the JABBA model in Fisheries Research. (This link will be open-access for the next 45 days). JABBA-Select is an extension of the JABBA model, which Maia co-developed, which implementes Bayesian surplus production model to account for differential impacts of selective fishing. JABBA-Select incorporates life history parameters and fisheries’ selectivity and distinguishes between exploitable biomass and spawning biomass, enabling more direct comparison with age-structured model results. Simulation-testing experiments showed that JABBA-Select performs at least as well as, and often better than, age-structured production models for data-moderate stock assessment cases. JABBA-Select is freely available online on the global open-source platform GitHub here.

This week, André and Maia Sosa Kapur (graduate student) journeyed to Wellington, New Zealand to attend the CAPAM Workshop in Next Generation Stock Assessment Models. André delivered a keynote talk, and Maia’s coauthor presented an upcoming diagnostics project. Lively discussions about the goals, requirements and objectives for the future assessment model(s) build to manage fisheries were had. André cautioned against the development of an “uber” model controlled by only one or a few scientists, and the group as a whole agreed that modularity and speed are important considerations in the new development. Other highlights included the revelation of the SIMULATE() function within TMB. A special issue of Fisheries Research following the workshop is forthcoming in 2020. 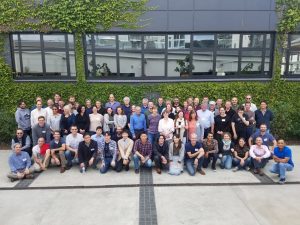 Alex Zerbini from the NOAA Marine Mammal Laboratory with the help of Grant Adams and John Best, PhD students in the Punt Lab, recently published an article in Royal Society Open Science on the population dynamics of Humpback whales (Megaptera novaeangliae) in western South Atlantic. They used multi-model Bayesian assessment that integrated multiple sources of catch data, estimates of abundance, model assumptions, and information on genetics and biology to assess their recovery. They estimated that a long period of exploitation drove western South Atlantic humpback whales to the brink of extinction, from nearly 27,000 individuals in 1830 to only 450 whales in the mid-1950s. Protection has led to a strong recovery and the current population is estimated to be at 93% of its pre-exploitation size.

This research was recently featured on BBC. 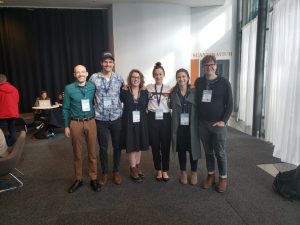 In a sweep, two PuntLab PhD students have been selected for the NMFS-Sea Grant Population Dynamics Fellowship this year. Students John Best and Maia Sosa Kapur each received three-year awards, which include tuition waiver and travel felowships. John’s research is entitled Improving spatial indices of abundance with fishery-dependent and -independent data, and he is mentored by Jim Thorson (another Puntlab graduate and previous PopDyn Fellow) at the AFSC. Maia is coadvised by Melissa Haltuch at the NWFSC (Puntlab graduate, and previous PopDyn Fellow) and Dana Hanselman at the AFSC, with a project entitled Effects of Spatial Mis-specification in Management Strategy Evaluation for Northeast Pacific Sablefish. Read the full announcement here.

Stay Up To Date